Assertive communication and the desired outcome

Last week, in group, we learned about assertiveness (the positive space between passive and aggressive) and the cost of communicating without it.  It didn’t look exactly like this, but the general gist is the same:

It was an excellent learning and something I absolutely intend to integrate into my life and relationships.  What we didn’t talk about, however, is how you switch to assertive, when you have gone too far down the passive and passive-aggressive avenue with someone.  I’ve talked about a recent situation in which I had been very passive (and in retrospect possibly a little passive aggressive like the ecard below) here and yesterday I finally decided to stand up for myself.

I thought my intent was to be assertive, but the truth is, I was not really looking for a resolution.  I didn’t express my feelings about the behavior with the desire to understand and resolve what caused it.  I had already decided that the relationship could not be salvaged and wanted this person to accept responsibility.  Unsurprisingly, well, surprising at first, but not so much now that I have had some time to reflect on it and mourn the outcome, she turned around and handed the blame right back to me.  She responded that she figured I had decided to stop being her friend when I didn’t honor her with the same conversation [about her] that I had with her partner, which I interpreted to mean that all of her behavior towards me had been caused by my earlier conversation.

I immediately launched into the scale of grief/loss emotions (denial, anger, bargaining, depression), not in that order, it was more like overarching feeling of depression and hopelessness with fluctuating degrees of denial, anger, and rationalizing, mixed with shame (old shame and new shame), frustration and feelings of betrayal.  I went from feeling like it was all my fault, to feeling like this was a perfect example of why I made the right decision (to end the relationship).  I wanted to explain what I said and why (that I had been concerned about her health).  I wanted to tell her I had intended to have the conversation with her, but she never gave me the chance (because of the way she had been treating me).  I wanted to tell her what her partner had contributed to the conversation (to tell on her, the way she told on me) and I didn’t even know what exactly had been said.

But the more I thought about it, and the more it ruined what should have been a lovely day with my husband, the more I realized it wasn’t about the details of this particular situation; the relationship had been over LONG before that conversation.  I had long resisted acknowledging the fact that we’ve both changed.  I recognize now that we were both just trying to be the person we had become and we both begrudged each other those changes.   I realize now that changing is OK.  Not just OK, it’s NECESSARY!  And just like letting go of beliefs and behaviors that no longer serve you, sometimes you have to let go of friendships that are no longer compatible with your new self, no matter how meaningful or deep they were at one time. 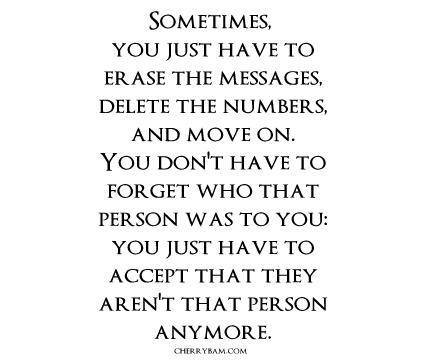 I’m sorry we couldn’t accept that we both needed to change and that we had to be hurtful towards each other in order to get the separation we needed.  I will always cherish the friendship we had and the things I learned from her.  I sincerely wish her well.  Lastly, and maybe most importantly, I forgive myself for not knowing how to handle this kind of situation before it got out of hand.  I thankful for this learning opportunity.

3 Responses to Assertive communication and the desired outcome