I wish I had given up sooner

I’ve always subscribed to the “never give up” mentality.  The “fall down 6 times, get up 7 times” measure of success.  The “you don’t fail until you quit trying” prophecy.  But I’m at a point in my recovery that I think it’s time to try something new.

Winston Churchill is often quoted (or paraphrased) for having said “never never never give in (up).”  Of course it is not generally quoted in the original context (war), but as a famous person saying don’t ever give up.  Keep trying, and whatnot.  The actual quote is:

As a non-historian, and continuing to take the quote out of context, I think the most important part here is except to convictions of honour and good sense.  So basically, never give up, unless it’s the right thing to do. 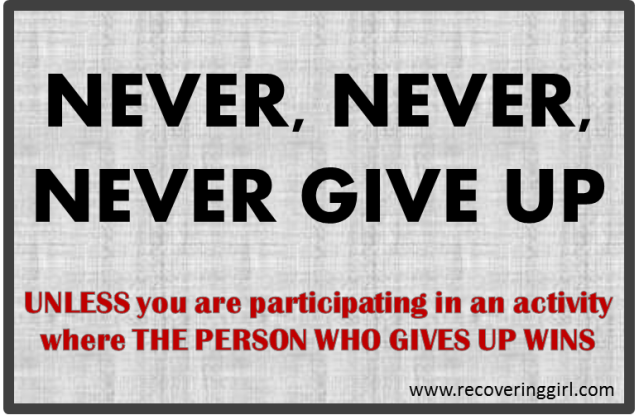 You are probably thinking “ugh, wrap it up, Recovering Girl, where are you going with this?”  I’m giving up dieting.  I’m serious.  It’s been about a year since my last official diet and since starting my journey of recovery from disordered eating.  To be honest, it’s been a bit of an “everything goes” anti diet, but that’s not really the point today.  The difference between then and now is that I still always thought this was a temporary thing.  Once I was recovered and my Inner Rebel didn’t fight me so hard on the dieting, going full throttle in the opposite direction at the mere mention of a diet, I would finally be able to make one of these “lifestyle changes” (code for the “it’s not a diet”-diet) work for me.  Not this time.

I used to believe that diets work (news flash: they don’t).  I just thought I didn’t have the willpower to stick with one long enough to get to my goal weight, or to not gain the weight back right away.  But in the last year or so of recovery, I’ve learned to question my definition of “works.”  If I’ve been on dozens of diets in my life, but I’ve never not been fat, did they really **WORK**?  Better yet, when I step back and look at the times in my life, when I have gained the most weight, it has ALWAYS been diet-backlash, gaining more than I had recently lost.  So not only did the diets not lead to long-term weight loss, they actually had the opposite effect.

The kicker is, I didn’t recognize it at the time, but there was actually a short period in my life, after the first 15 years of dieting, when I didn’t worry about the number and I cooked food I enjoyed, ate when I felt like it, exercised for the fun of feeling strong and lost weight.  That lasted right up until the seamstress told me the fit on my wedding dress was almost perfect, I only needed to lose like 5 pounds (not that I was anywhere near what a doctor would recommend for my height, but for the sake of this dress in this size…).  I got married 3 months and +30 pounds later, desperately trying to lose those 5 pounds.

This entry was posted in Uncategorized and tagged diet, Eating disorder, happiness, lifestyle change, never give in, never give up, recovery, weight loss, Winston Churchill. Bookmark the permalink.